Recently I bought a set of electronic bagpipes, which are made in Germany and are called RedPipes . I bought the black version which is shown in the photograph below. I’ve had them for a couple of weeks now and have given them a thorough workout, and I must say I’m very impressed. 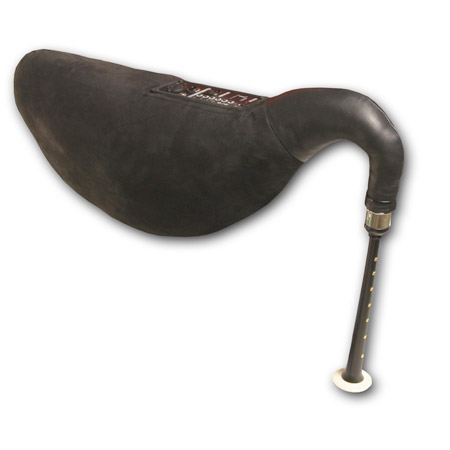 Playing the pipes is very realistic. One has to strike in the drones and maintain pressure on the bag, just like the real thing. If pressure is not maintained the chanter stops. The pressure setting can be adjusted so a comfortable posture can be achieved. Halftones, vibrato, and overblowing are possible on the RedPipe itself. The drones can be adjusted to include baritones and so on, which produces a quite interesting effect when Scottish highland pipes are selected. When the RedPipe is connected to a Roland Microcube amplifier, reverberation and other effects extend the instrument further. Of course the amplifier also allows the instrument to be played at authentic volume, or even at well over 100db so the neighbours can truly be annoyed! (I play mine so they can only be heard in one room, which makes them ideal for practice).

There are ten models of RedPipes, with various sounds and fingering methods, including Scottish, French, German, Swedish and Spanish, and some with “imitation” drones.I bought the most basic set which is not unlike a practice goose. My set has voices for Scottish Highland, Scottish Smallpipes, a medieval bagpipe, and Gaita. These voices have been sampled from real pipes and hence produce a very realistic sound, which can be modified by adjusting switches on the pipes themselves, or on the amplifier. It is also possible to connect the RedPipe to a midi. I’ve fiddled around with this a bit using Studio Piper , which means Uilleann and Reelpipe voices are possible. This took quite a bit of doing because I had to change input channels and so on, but someone experienced in midi could achieve all sorts of voices. For the moment I’m happy with the Highland, Smallpipe, and Uilleann voices, with Smallpipes being by far my favourite.

Of course RedPipes are not a complete substitute for Highland bagpipes, but they’re close! As I get older and blowing becomes more difficult I can see they will replace the main instrument. For me they are a substitute for my Smallpipes. I’ve always found them difficult to tune, and keep in tune, – no such problem exists with the RedPipes. So if you are after a high quality instrument that can produce several authentic voices and effects, and feels like you are playing the real thing I highly recommend RedPipes. Bagpipes are now a 21st Century instrument!